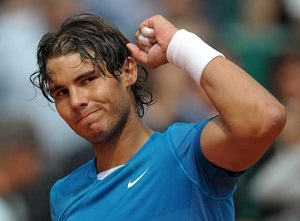 Rafael Nadal looked to be continuing his subpar form versus Verdasco in his first match in Hamburg. A long and gruelling first game in set two turned it around for him, and since he hasn't looked back. Sure, he wasn't on top versus Vesely. However Cuevas got beaten in style! Then yesterday he finished off Seppi slaughter style. This even if Rafael had to receive treatment early in the second set. The Spaniard was clearly in pain, and one could see his mobility wasn't as great as it was before the lenghty treatment spell.

Fabio Fognini is not Mister Stable, but at the minute his body language is good, and it looks like he has curbed that Italian temper of his. At his very best he is probably one of the six-seven best clay court players on the ATP tour.

I urge you to stay away from betting Rafael Nadal at odds around 1.20 given the circumstances. Sure, if he is fit and mentally up for it he can win this in straight sets and without hardly breaking a sweat. Are you going to risk it though?

The best thing to do with this match in my not so humble opinion is to watch the action live. If Nadal isn't up to his latest best. Back Fognini at great prices. You got to be quick though before everyone and their uncle smells a rat.