The German Bundesliga starts back up again this Friday and we are looking forward to a season full of interesting matches and lots of offensive football and goals! Below you can read our first part of the Bundesliga season preview. We will publish the rest of the previews in our sports article section, and remember to also regularly check our predictions page also to get all the latest free bet recommendations!

Bayer Leverkusen will start their season against Hoffenheim, and we expect them to fight in the top of the league this season also. Will “Neverkusen” be able to improve on their 4th place from last season?

Bayer Leverkusen is, as the name suggests, closely tied to the chemical company Bayer. This gives the club a very strong financial base, and it shows. Leverkusen has been a top club for a long time, and last two seasons they ended up in 4th place. Under coach Roger Schmidt they are playing an offensive style football that is much liked by the Leverkusen fans.

The veteran Spahic, a solid central defender, has left the club and could be missed. His replacement is not bad though, as Leverkusen has signed Ramalho from Salzburg. Milik did not perform well enough last season, and has been returned to the Dutch side Ajax. The two midfielders Reinartz (was not a regular feature, free transfer to Frankfurt) and Castro (central midfield, sold to Dortmund) have left the club. Leverkusen has in return signed Kramer from Gladbach, a player we like and believe will improve to the squad. He will most likely play in central midfield together with Bender, a very good combination. The big talent Tah has been brought in from Hamburger SV, but whether or not he will get enough time on the field remains to see as Papadopoulos will remain in the club.

With the above mentioned new additions to the club, the squad looks pretty well balanced. Leverkusen’s dynamic playing style should still fit Kiessling as a number 9 player, although we would have liked an even better player in that role. Regardless, the team looks strong.

Leverkusen has performed well in their last pre-season training matches, and they had no problems against Sportfreunde Lotte in the German cup. The season opener is at home against Hoffenheim, and next midweek they have an away match against Lazio in the Champions League qualifications. Exiting times for Leverkusen fans indeed!

A place among the top four should be the ambition for Leverkusen, as this gives them a Champions League spot. And we believe they are odds-on for achieving this, and they should manage third or fourth place. Second place is also within reach, while fifth place really should be worst case scenario for the club.

Betsafe has a season h2h bet out that we find tempting. At the moment you can get 1.78 for Leverkusen to end above Gladbach on the table. When you consider that Gladbach has lost both Kruse and Kramer, the odds look good. 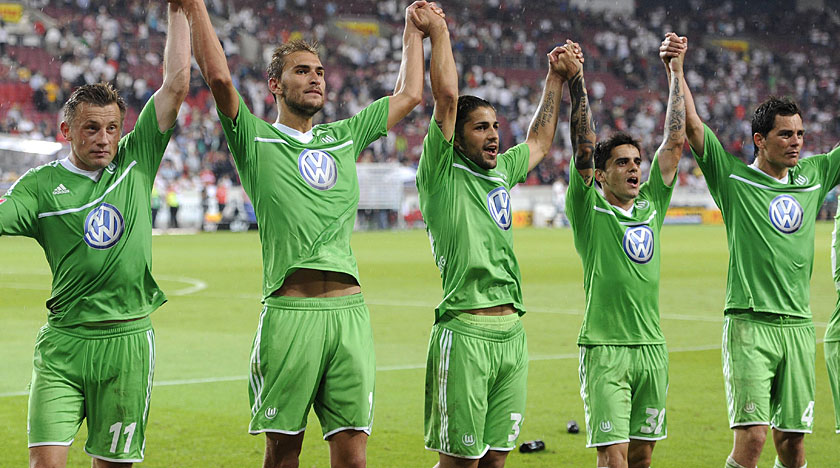 Wolfsburg won the German cup last year and finished in a strong second place in the league. The club has the powerful Volkswagen group backing them, and therefore has the financial muscles few other German clubs can compete with. They have fought long and hard to establish themselves as a top club, but now they are there!

With all the money coming from Volkswagen, there is no need to sell players. Kevin De Bruyne is though rumoured to be linked to other clubs, and especially Manchester City is chasing him. But so far he will remain with Wolfsburg.

Wolfsburg has not signed that many big names either. They have brought in Max Kruse, a very skilled attacker and penalty taker, and in our opinion one of the best in the league. Besides Kruse, the new additions are mostly new and young players and the club is planning ahead for future seasons. Considering the quality of the starting XI this seems like a prudent strategy.

In defence Wolfsburg looks really good. Luiz Gustavo seems to be enjoying his time with the club, and the Brazilian might as well be the best defender in the world. Just think back to the 2014 World Cup, how good was he not for Brazil? Naldo, another Brazilian, performed really well last season, although he has turned 32 so we have to see if he can keep the same level for another season. Wolfsburg also has Knoche and Klose, so are not lacking defenders.

If Wolfsburg is to repeat the strong result from last season, then they should do all they can to keep De Bruyne. After all, he was named the best player of Bundesliga last season, and is not replaced easily.

Another key player will be the Dutch forward Bas Dost. He scored 16 goals in 21 matches last season! Dost is a bit of a question mark for us, as he has not been that consistent during his career, but he is 26 now so it is about time he steps up and delivers on a more consistent basis. Max Kruse is not your typical number 9 player, so we are unsure if he can perform as well as a center-forward/striker. Regardless of this, Wolfsburg has several players they can use and there will be goals!

Can Wolfsburg challenge Bayern Munich for the title? We think they are perhaps three big signings away from that. But although there are some questions Wolfsburg has to address, they should be able to fight for the second place. Gladbach will probably fall a bit behind this season, and Schalke is too unstable. Dortmund seems to be a bit too unstable as well, and perhaps a bit overestimated compared to other top teams in the league. And Leverkusen should also be considered a challenger.

Betsafe has a really attractive offer on Wolfsburg to finish in top 3. They offer 19/20 (1.95) which is higher than most other bookies, and worth a bet.

If you instead fancy a bet on Wolfsburg to take the league title BetVictor has the top price of 20/1.