There will be a couple of days now with not so much football league action as the qualifiers for the European Championship will play later this week, but regardless we will take a look at two of tonight’s matches below. 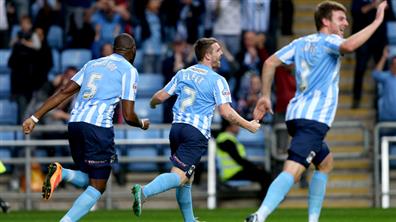 Coventry has nine points in four matches so far this season. They started with three consecutive wins and plenty of goals, but in the fourth match they lost against current number one Walsall. With a victory tonight Coventry will be second in the League One table and just one point behind Walsall. For this match they will miss midfielder Maddison plus defender Willis, both regular starting XI players.

Southend are newly promoted from League Two, and has not impressed so far this season. With just one goal in four matches, the points are hard to come by, and they have played two draws and lost two matches. Last season the team performed well when travelling, and both teams so far this season has been on away field.

Coventry is clearly the best team, and showing good scoring form. But they are not that strong in defence, and if Southend had been a bit better at finishing this would have been a good match for betting on the over 2.5 goals. We are more tempted by the home win, and if you agree you can get 7/5 with BET365.

Bochum is looking good so far this Bundesliga 2 season. They have 12 points in four matches, and a goal difference of 9-2. They seem to have improved from last season, when they ended in 11th place, and was hard to beat at home (too many ended as draws, but they only lost three home matches). Bochum is expected to field the same team as in last match, but Felix Bastians and Celozzi (both defenders) are currently not yet confirmed as match fit.

In 1860 Munchen there is chaos, as usual. There seems to be a struggle for power among the club leaders, and the focus for what is best for the club seems to be somewhat missing. This might affect the performance on the field, 1860 does not have the best squad in the league, and it is probably hard for the team to find their rhythm with so much distraction. In four matches the club has only earned two points, but both points came in the last two matches, so maybe there is some hope of improvement. For tonight’s match they will miss Hain and Wolf, both offensive players. In fact, both players have regularly featured in the team that so far has scored only two goals, but hit the woodwork six times and also missed a penalty during the first four matches. One other point to make is the good head to head stats for 1860 – they have won the last four matches against Bochum.

One cannot avoid having the feeling that 1860 Munchen has had some bad luck, as they have performed quite well despite the results. Bochum is in good form, and could perhaps make the mistake of underestimating 1860. As we see it, there are two ways to consider this match: one, you play against 1860, emphasizing the form of the home team and the lack of finishing for the away team. If you agree, you can get xx with yy. Or alternatively, two, you watch the match live and consider an over 2.5 goals bet. If both earlier mentioned Bochum defenders are unavailable, and considering that last three of four encounter has ended over 2.5, plus the fact that 1860 has been somewhat unlucky with finishing and Bochum is showing good scoring form, it could be worth taking a live bet with price of around 2.0 on over 2.5 goals. For this we recommend BET365 (sign up here if you do not already have an account). They are streaming tons of football matches and has a great live betting product.