Tonight will see the US Open women’s semi-finals take place. Below we give you a short preview of the two matches.

This looks like a clear victory for Serena Williams. She has beaten Vinci in all the four previous encounters, and not lost a set. Last encounter was in Toronto some weeks ago, Serena won that match 6-4 6-3. Vinci has had problems earlier in this tournament, but has managed to fight her way to this semi-final.

Williams should win this one, she seems unstoppable and beat her sister Venus in the quarter-final. If you agree, consider a handicap bet on Williams, for instance Williams -6.5 games at 4/5 (1.80) with PaddyPower.

Halep is the favourite in this match, and she did impress by beating Azarenka 6-4 5-7 6-4 in the quarter-final. But she has been a bit troubled by a muscle injury this week, and will not have a full day to rest before tonight’s match.

Pennetta has had a good tournament, and beat Kvitova in the last match. She seems to play her best tennis on the US Open surface, and has previously reached the quarter-finals four times between 2008 and 2014, plus a semi-final in 2013. Head to head with Halep she is leading 3-1 – Halep beat her in this tournament last year, but Pennetta won the last encounter earlier this year in Miami.

We fancy a bet on Pennetta in this match, mostly due to Halep missing a rest day after two previous hard-won matches. If you agree, PaddyPower is offering attractive 13/5 (3.60) on Pennetta to win. 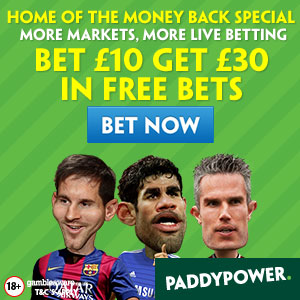 PaddyPower is offering lots of attractive bonuses, including welcome bonuses, reload bonuses and regularly other promotions. At the moment they have a Get £30 free for new customers (place a £10 bet and get three free £10 bets), so make sure you sign up and take advantage of their great offers!